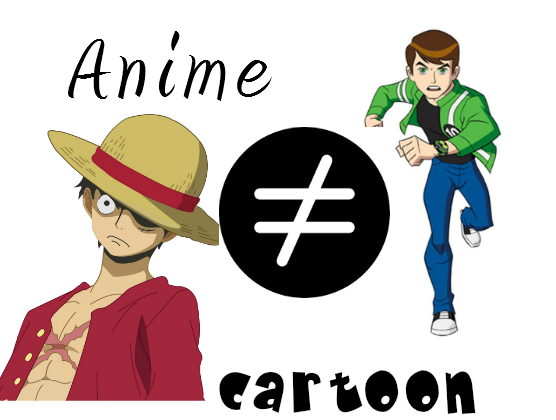 Reasons Why Anime is Not a Cartoon : A diehard fan anime lover/fan would always find the comparison of anime with cartoons offensive. It’s definitely not okay to put PowerPuff Girl and Naruto in the same category.

The offense is forgivable if someone who doesn’t watch anime commits it. But if you have heard of famous anime and even seen them, better get your facts straight now.

Here’s every reason why anime is not a cartoon, read on:

Anime is Japan’s answer to Disney.

The success of western cartoon flicks like Snow White and the seven dwarfs inspired Japanese artists. The animators and artists in Japan then decided to take the art of anime and manga forward.

The history of anime dates all the way back to the 1920s, But most of the archives from the decade have been destroyed.

The 70s saw the industry booming and more people adapted manga into anime. Eventually, anime became famous all around the world. However, Japan is where they originated.

Also, anime in Japanese means anything that’s animated. So, a simpler way of understanding what’s an anime is whatever is animated in Japan.

Over the years, Japanese animators breathed their personal style into the animation work. This gave anime their traditional Japanese style.

If you can’t tell anime from cartoons, focus on the eyes of the characters. Anime characters have more human-like, noticeable and detailed eyes.

The top reason why anime is not cartoon is that the character sketches of anime characters are well detailed.

There are rarely any exaggerations. Anime sketches look as human and natural as possible. They are close to real sketches and realism.

Anime are series, not a collection of episodes

Most cartoons follow the simple process: A different script for a different episode.

Anime scripts focus on developing the premise and the storylines through the different episodes. All the episodes culminate in one big conclusion or the season finale.

Anime broadcast one story in numerous parts (episodes) and they don’t write a separate episodic script. The series story consists of episodes and broadcast. They follow the conclusion format too but all episodes are connected. So, if you skipped episode 3, you won’t understand episode 4.

Anime is designed to suit a certain age, while cartoons are generally for the younger audience.

Kodomo Anime is for kids, Shoujo for girls, Shounen for the boys. Then there are some for the adult audiences like harem, ecchi, etc. Anime has even explored serious topics like homosexuality. Cartoon focuses extensively on entertainment and expanding the audience. It’s an Anime Fact that Anime is not only for kids.

Emotions in Anime can be easily expressed with different animation styles.

As you can see in above pictures it’s pretty damn easy to tell how the person is reating to different situations.

The purpose of anime is the biggest reason why anime is not a cartoon.

They are not always hilarious.

Story writers are pushing the boundaries and introducing bleak-realist storylines, but mostly cartoons end up in a happy ending. Since they cater to a younger audience, they are supposed to have a happy ending. Cartoons are written and designed to induce laughter.

Anime touches upon bleak subject matters and doesn’t focus primarily on making people laugh. It is full of mixed emotions just like Hollywood movies or series.

Anime focuses on entertaining too, but it doesn’t always prioritize evoking laughter.

Anime and Cartoons, both are animations. However, factors like their audience, design, purpose, and conception set them apart. It’s evident from some reports that Anime influence on American culture is true.

New to Anime? Get started with High school of the dead, Baccano!, Claymore, etc., and you will find yourself asking for more.